Posted on August 17, 2011 by Jabberwocky Soliloquy 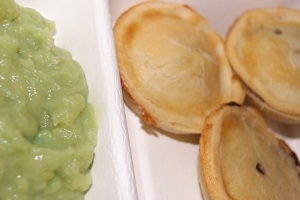 As previously hailed this post is all about the tasting. We shall see where the winding progress of the narrative takes us, because it is notoriously fickle, but I will try and keep it on the subject of food. Our intentions were to serve all of our menu from the Leamington Food Festival (save the date, 10th and 11th September, Pump Room Gardens) to our friends and fellow Jabberwocky enthusiasts, in the hope of receiving critical commentary, suggestions and glorious, humbling praise. Naturally I had already planned several gracious acceptance speeches for the various accolades I would receive throughout the night, and Barny had been cooking all day in preparation for the grand moment.

I should mention, because otherwise it will sneak up on me later, that Barny, with a quite break-taking disregard for the integrity of the story, had decided to cook from the van. Readers of last weeks post will undoubtedly find this an unpleasant after-taste on what was essentially a great piece of prose, so please accept my most arbitrary of apologies for the inconvenience. Let’s all move on together.

At the time I was largely too hyper on nervous and highly self-conscious energy to really taste a great deal, which is strange, as my invested effort in the cooking had involved snaffling a spoonful of pie filling whenever Barny wasn’t looking and a small amount of washing up. At any rate, I judged the food to be good as none of the plates came back full. The real test, however, was the double-sided questionnaire I had dispensed to each brave participant. Along with finding a pen that worked we had tasked them with analysis of the food; as honest and factual as the could possibly muster.

I am now sitting next to the pile of sheets, having sifted through them, and I’m looking for a way to put everything into words. Here is the fact: I am not good at taking advice. I am keenly aware of this as I can feel the hairs on the back of my neck stand on end whenever I hear the -no doubt well intended- words “you know what you should do…” and I begin to consider ways of extracting myself for the conversation, if necessary by brutally dismembering my conversation partner. Last night’s advice, captured in writing, was gloriously different.

Simply put: The doughnuts need less bread and more brulee. The caesar salad is too difficult to eat in its current form. The pies were a good level of flaky, but probably need gravy. The brownie had sauce issues, easily resolved with more sauce. The profiteroles need a splash of salad to go with them and the fritters need a better name. Buried in those sheets were ideas we had not considered, suggestions that would never have occurred and praise that made me happy. All in all, as I sit here amidst the wreckage of our living room and postpone the clean up operation just a little longer, I think we got exactly what we needed.

On a side note taking advice is still something I struggle with, and in this business there is a near endless supply of opportunistic souls waiting to bestow it. I am too polite to interrupt, decline and tell them where to shove their undoubtedly valid opinion, and I simply can’t articulate how badly I want to throttle them with their own pretentious white headphones. In this spirit I would ask that you do bestow advice freely, should we ever meet in person, so that I will either come to terms with my failings or overcome them and move on, possibly by means of court injunction. Either way I will probably learn something.

The Jabberwocky drifts through space, collecting the most tasty things to eat. It brings them home and cooks them, humming about deliberate omissions and fortifying colours. As with all things it is, or should be, just happy to be here.
View all posts by Jabberwocky Soliloquy →
This entry was posted in Hopeful, Street Food and tagged advice, leamington food festival, leamington spa, the beast. Bookmark the permalink.